You are using an out of date browser. It may not display this or other websites correctly.
You should upgrade or use an alternative browser.

Status
Not open for further replies.

Whenever you are having issues or we release an update, it's a good idea to clear your FiveM cache.

Recently, the developers of FiveM changed the location of the cache folders which you should delete. If you installed FiveM by putting the `FiveM.exe` inside of an empty folder, the data folder will be right inside of your FiveM folder underneath FiveM Application Data 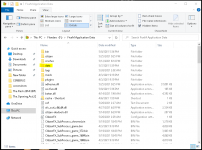 If you didn't, then you should have a Shortcut that takes you to the folder directly, called "FiveM Application Data". You can also just enter %localappdata%\FiveM\FiveM.app\cache in your Windows Explorer address bar or Start Menu:

Go inside the data folder and delete only these three folders

Don't delete the game folder or you will have to re-download the game cache.

After that, you'll see all of the resources re-downloaded when you reconnect to the server!

Last edited by a moderator: May 26, 2021
Reactions: Mercy Kloutz, Malachi Trutwein, Evelyn Solace and 2 others

Status
Not open for further replies.